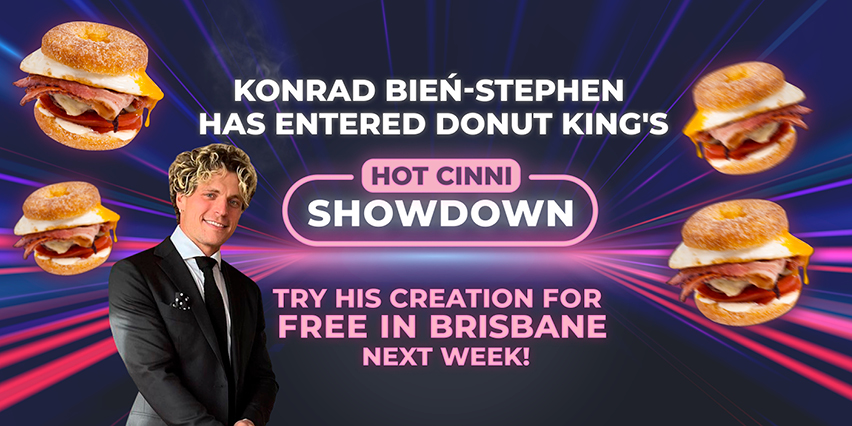 On Monday July 11th and Tuesday July 12th, Donut King is popping up in King George Square with the help of the Bachelorette’s Konrad Bień-Stephen to give away FREE bacon and egg donut burgers and coffee to kick start the week.

The activation is part of Donut King’s “Hot Cinni Showdown” which is a search for Australia’s greatest donut hack, with the chance to win $10,000 cash and the opportunity to have your donut hack inspire a new menu item in Donut King stores around the country in 2023.

Donut King Marketing Manager, Raquel Hine, said the pop-up in King George Square is an opportunity to share the ultimate donut hack with the community and to have fun with the humble hot cinnamon donut.

“Donut King is all about creating memories and experiencing the joy and nostalgia of the hot cinnamon donut, and we’re excited to bring our Donut Trailer up to Brisbane and waft that sweet smell of cinnamon through the CBD.”

“What better way to start the day than with a free bacon and egg burger served between two hot cinnamon donuts, and a coffee on the side, of course,” she said.

Konrad Bień-Stephen is on board to help get as many bacon and egg donut burgers into the hands of Brisbane’s city dwellers during the activation, and will be popping up in the Donut King Trailer from 9am to 12pm on Monday July 11th and Tuesday July 12th.

“A bacon and egg roll is the ultimate tradie breakfast, and I’m thrilled to be working with Donut King to launch the bacon and egg donut burger – there isn’t a better flavour combination,” he said.

Donut King will be popping up in King George Square outside of City Hall from 7am to 2pm on Monday July 11th and Tuesday July 12th, with the Donut King Trailer serving up 1,000 free bacon and egg donut burgers and coffees each day.